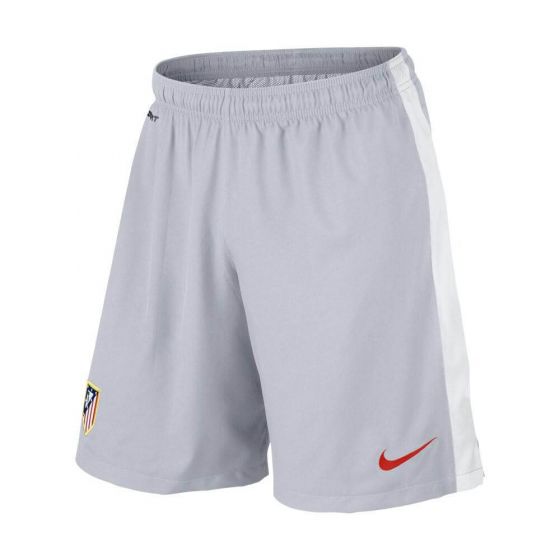 The Atlético Madrid Kids (Boys Youth) Away Shorts 2014 – 2015 are an accompanying piece of kit from Nike for the Spanish Champions of Atlético Madrid. The kids away football shorts match up with the Atlético kids away shirt to create a smart bit of kit worn on the team’s travels around Europe.

At Soccer Box we deal with Nike directly. Their manufactured football kits come directly to us so that we only stock official, licensed football shirts, shorts, socks, mini kits, and training wear. This in turn guarantees you, our loyal customer, a fantastic quality gift.

We dispatch gifts such as these Atlético away shorts all over the world on a daily basis, using a fast international shipping service to get them to their destination. Tracking, and signature on delivery, can be requested for added peace of mind.

Customers outside of Europe pay no tax on their orders, customers in the UK receive free shipping for orders of £75 and over, and we regularly offer discount codes in our store newsletter as well as on our social media pages. Take advantage of a Soccer Box deal today!

It’s never easy being the reigning Champions. It’s harder when you’ve won the Double of the League and the Cup. This is the daunting prospect that faces the talented team of Atlético Madrid and their inspired manager Diego Simeone. The Vikings were beaten to the punch with Simeone’s triumphs. Real may have won the Champions League to become the Champions of Europe but neither side has stopped improving their team, with the likes of Suarez, Rakitic, Kroos, and Rodriguez making their way into the squads. Atlético Madrid will have a difficult task on their hands this season.

The Atlético Madrid kids away shorts are a simple, minimal design. They’re plain grey with a white stripe down each side of the away shorts. Nike’s plan is to create a staple kit range for each of the clubs they make kits for, as a platform to develop future strips from.

The waistband of the Atlético away kids shorts are elasticated. This provides a snug fit and comes with drawstrings for extra security. Each leg of the kids away shorts has stitching on; the right bears the Atlético Madrid club crest and the left the red Nike Swoosh.

Beneath the waistband on the front of the Atlético Madrid kids away shorts is the Dri-FIT logo in black. This is for Nike’s sweat wicking science that’s incorporated into the football shorts. Perspiration is drawn into the shorts, and evaporated out into the air around your child to keep them cool and dry. Mesh fabric on the back of the shorts helps the air circulate and speed this process up.

At Soccer Box we’re big on Atlético Madrid football shirts. The 2014 – 2015 home and away shirts, shorts, and socks are all available in adults and kids sizes so get yours while stock lasts!